Beasts of the Southern Wild
"In a forgotten but defiant bayou community cut off from the rest of the world by a sprawling levee, a six-year-old girl exists on the brink of orphanhood. Buoyed by her childish optimism and extraordinary imagination, she believes that the natural world is in balance with the universe until a fierce storm changes her reality. Desperate to repair the structure of her world in order to save her ailing father and sinking home, this tiny hero must learn to survive unstoppable catastrophes of epic proportions."

Brooklyn
"An Irish immigrant lands in 1950s Brooklyn, where she quickly falls into a new romance. When her past catches up with her, however, she must choose between two countries and the lives that exist within."

Faces
"John Cassavetes puts a disintegrating marriage under the microscope in the searing Faces. Shot in high-contrast 16 mm black and white, the film follows the futile attempts of the captain of industry Richard (John Marley) and his wife, Maria (Lynn Carlin), to escape the anguish of their empty relationship in the arms of others."

Juno
"...stars Ellen Page as the title character, a whip-smart teen confronting an unplanned pregnancy by her classmate Bleeker (Cera). With the help of her hot best friend Leah, Juno finds her unborn child a perfect set of parents: an affluent suburban couple, Mark and Venessa (Bateman and Garner), longing to adopt.."

Lady Bird
"Directed by Greta Gerwig and nominated for five Oscars, Lady Bird is a warm, affecting comedy about a high schooler (Saoirse Ronan) who must navigate a loving but turbulent relationship with her strong-willed mother (Laurie Metcalf) over the course of her eventful and poignant senior year of high school."

Little Miss Sunshine
"Tells the story of the Hoovers, one of the most endearingly fractured families ever seen on motion picture screens. Together, the motley six-member family treks from Albuquerque to the Little Miss Sunshine pageant in Redondo Beach, California, to fulfill the deepest wish of 7-year-old Olive, an ordinary little girl with big dreams."

Sideways
"...tells the story of Miles (Paul Giamatti), a failed novelist, and his soon-to-be married friend Jack (Thomas Haden Church), a washed-up actor. To salute the remains of their youth, the two men take one last road trip in the week before Jack's wedding. .."

The Squid and the Whale
"In his third feature, director Noah Baumbach  scores a triumph with an autobiographical coming-of-age story about a teenager (Jesse Eisenberg) whose parents are divorcing. The father (Jeff Daniels) and mother (Laura Linney) duke it out in half-civilized, half-savage fashion, while their two sons adapt in different ways, shifting allegiances between parents."

Walking Ned Devine
"Jackie O'Shea, a resident of the tiny Irish coastal village of Tully More, discovers that one of his neighbors has won the lottery - the question is, who? It takes some doing, but Jackie figures out that the lucky person is none other than Ned Devine... " 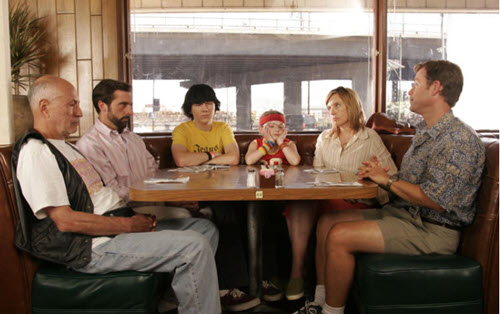