Cabaret
"A nightclub singer and an English writer embark on a doomed romance in Weimar Republic-era Berlin, as the Nazi party begins steadily rising to power and the mood becomes dark."

Carmen Jones
"At an all-black army camp, civilian parachute maker and 'hot bundle' Carmen Jones is desired by many of the men. Naturally, she wants Joe, who's engaged to sweet Cindy Lou and about to go into pilot training for the Korean War. Going after him, she succeeds only in getting him into the stockade. While she awaits his release, trouble approaches for both of them. Songs from the Bizet opera with modernized lyrics."

Carousel
"Billy Bigelow, a smooth-talking carny man, falls in love with a millworker. Tragedy strikes these star-crossed lovers and their journey is not easy."

Chicago
"This Best Picture winner is based on the Broadway hit about homicidal femmes fatales during the Jazz Age.,"

Gentlemen Prefer Blondes
"Lorelei and Dorothy are just 'Two Little Girls from Little Rock', lounge singers on a transatlantic cruise, working their way to Paris, and enjoying the company of any eligible men they might meet along the way, even though 'Diamonds are a Girl's Best Friend'."

The Greatest Showman
"An original musical screenplay brings to life the story of P.T. Barnum and his creation of 'the greatest show on Earth'. Rising from nothing, P.T. sets out to make a better life for his family. His creativity and drive take him on an fantastic journey beyond what he or anyone else could have imagined..."

The King and I
"Yul Brynner's magnetic, Oscar-winning performance as the demanding 19th century king of Siam has indelibly linked him with the role. The clash of temperaments between governess Anna and the King culminates with 'Shall We Dance', one of the screen's most joyous musical moments."

La La Land
"A struggling actress and an aspiring pianist fall in love as they both pursue their dreams in L.A. However, their blossoming relationship is challenged when their careers pull them in different directions."

Oklahoma!
"A cowboy wins his girl despite the intervention of a sinister hired hand."

Singin' in the Rain
"A 1920s silent-film star falls for a spunky chorus girl, much to the dismay of his diva-ish leading lady, in this lighthearted musical spoof of the early days of Hollywood."

The Sound of Music
"As Nazism takes over Austria, a governess and a widowed father fall in love and escape the country with his large family of musically-talented children."

A Star Is Born (Garland)
"A once famous, now drunken film actor lends his fading star power to further a young unknown, whom he marries. And while her star soars, his fizzles in the bottle."

Umbrellas of Cherbourg
"An angelically beautiful Catherine Deneuve was launched to stardom by this dazzling musical heart-tugger from Jacques Demy. She plays an umbrella-shop owner's delicate daughter, glowing with first love for a handsome garage mechanic, played by Nino Castelnuovo."

West Side Story
"Rival New York street gangs war in Manhattan over turf boundaries while two youths fall in love, but they are from opposing groups."

The Wizard of Oz
"A tornado whisks young Kansas native Dorothy and her dog Toto away to the magical land of Oz, where they befriend a Scarecrow, a Tin Man and a Cowardly Lion on their journey to confront the Wicked Witch of the West and visit the wonderful Wizard of Oz." 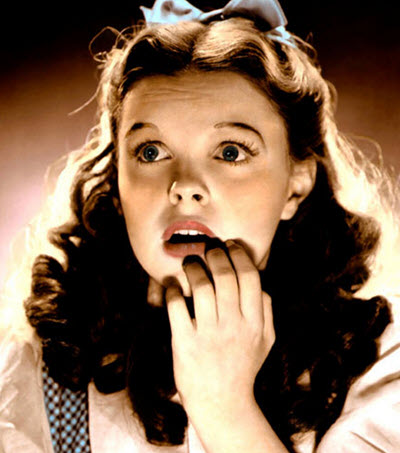 (Judy Garland in The Wizard of Oz)