All About Eve
"A story of theatrical ambition, deception, and hypocrisy. The legendary Bette Davis, in her greatest role, plays a powerful, aging actress, at the apex of her career, who does battle with a calculating newcomer."

All the President's Men
"Reporters Bob Woodward and Carl Bernstein investigate a 1972 burglary at the Democratic National Committee headquarters, eventually discovering a cover-up that would lead to the president's resignation. Adaptation of Woodward and Bernstein's book."

American Beauty
"An advertising executive has a midlife meltdown after becoming infatuated with his daughter's friend and discovering his materialistic wife's infidelity."

Boyhood
"A boy comes of age in this drama, which was shot over the course of 12 years with the same cast."

The Deer Hunter
"The Vietnam War destroys the lives of three friends who survived brutal torture by the Viet Cong. Years later, an attempt by one of the men to track down the other two reveals just how deep their mental and physical scars run."

The Farewell
"In this funny, heartfelt story, Billi's (Awkwafina) family returns to China under the guise of a fake wedding to stealthily say goodbye to their beloved matriarch--the only person that doesn't know she only has a few weeks to live."

Network
"A mentally unstable news anchor becomes a superstar when he begins delivering nightly rants, after being told he's to be fired, and threatens an on-air suicide for his final broadcast."

Norma Rae
"Sally Field won an Oscar for her portrayal of a textile worker whose mundane life is changed by the arrival of a union organizer from New York."

On the Waterfront
"A dockworker and washed-up boxer struggles under the 'pier' pressure of mobsters who control the waterfront on which he works. A Best Picture winner."

The Post
"A cover-up that spanned four U.S. Presidents pushed the country's first female newspaper publisher and a hard-driving editor to join an unprecedented battle between journalist and government. Inspired by true events."

A Streetcar Named Desire
"A faded Southern belle moves in with her sister and brutish brother-in-law in New Orleans, where he torments her delicate sensibilities, and she becomes disconnected from reality."

Thelma & Louise
"Two female friends try to drive to Mexico in order to escape the police after one of them kills a man attempting to rape the other. A sympathetic cop tries to talk them out of their plan, but the women don't feel they can trust any man."

Taxi Driver
"A mentally unstable Vietnam veteran makes his living as a cabbie in New York, attempts to date a campaign worker, and befriends an underage hooker who he tries to get out of the life."

The Tree of Life
"From Terrence Malick, The Tree of Life is the impressionistic story of a Midwestern family in the 1950's. The film follows the life journey of the eldest son, Jack, through the innocence of childhood to his disillusioned adult years as he tries to reconcile a complicated relationship with his father (Brad Pitt). Jack (played as an adult by Sean Penn) finds himself a lost soul in the modern world, seeking answers to the origins and meaning of life while questioning the existence of faith..." 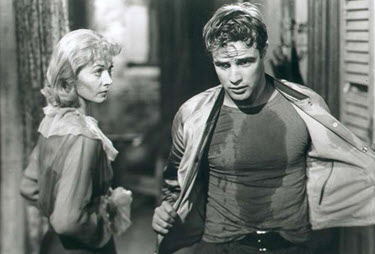 (Vivien Leigh and Marlon Brando in A Streetcar Named Desire)