Black Swan
"Nina (Portman) is a ballerina in a New York City ballet company whose life, like all those in her profession, is completely consumed with dance. She lives with her obsessive former ballerina mother Erica (Hershey) who exerts a suffocating control over her. When artistic director Thomas Leroy (Cassel) decides to replace prima ballerina Beth MacIntyre (Ryder) for the opening production of their new season, Swan Lake, Nina is his first choice. But Nina has competition: a new dancer, Lily (Kunis), who impresses Leroy as well. .."

Gone Girl
"On the occasion of his fifth wedding anniversary, Nick Dunne (Ben Affleck) reports that his beautiful wife, Amy (Rosamund Pike), has gone missing. Under pressure from the police and a growing media frenzy, NickÕs portrait of a blissful union begins to crumble. Soon his lies, deceits and strange behavior have everyone asking the same dark question: Did Nick Dunne kill his wife?"

The Manchurian Candidate
"POWs return from Korea to a heroes' welcome, but it appears that they have been brainwashed, and it takes its toll in different ways on each of them."

No Country for Old Men
"A man finds a fortune in drug loot in 1980 West Texas and tries to recover it but must dodge a lawman and a bounty hunter." 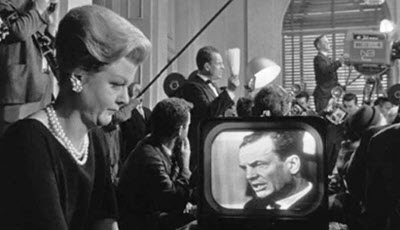 (Angela Lansbury in The Manchurian Candidate)