The Day After Tomorrow
"When global warming triggers the onset of a new Ice Age, tornadoes flatten Los Angeles, a tidal wave engulfs New York City and the entire Northern Hemisphere begins to freeze solid. Now, climatologist Jack Hall, his son Sam, and a small band of survivors must ride out the growing superstorm and stay alive in the face of an enemy more powerful and relentless than anything anyone has ever encountered: Mother Nature."

The Poseidon Affair
"A luxury liner is overturned by a 90 foot tidal wave. Ten top stars try and survive in this Oscar(r)-winning film which began Irwin Allen's successful disaster series."

Titanic (1953)
"A man and his wife are caught in the tragic sinking of the Titanic on her maiden voyage in 1912. Personal heroism and self-sacrifice are climaxed by the awesome final plunge of the ship into the depths of the sea."

The Towering Inferno
"An all-star cast and spectacular special effects combine in the thrilling story of a fire which traps hundreds of dignitaries 138 stories above ground."

Volcano
"Los Angeles has seen its share of natural disasters — earthquakes, fire storms, mud slides. But now, the City of Angels is experiencing its most cataclysmic event ever. A volcano has erupted in L.A.'s busy mid-Wilshire district.." 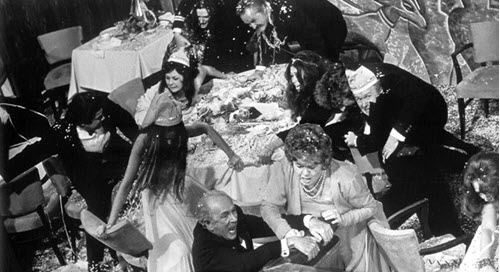