Au revoir les enfants
"This late work from French writer-director Louis Malle tells a heartbreaking story of friendship and devastating loss concerning two boys living in Nazi-occupied France. At a provincial Catholic boarding school, the precocious youths enjoy true camaraderie--until a secret is revealed. Based on events from Malle's own childhood, the film is a subtle, precisely observed tale of courage, cowardice, and tragic awakening."

The Book Thief
"While subjected to the horrors of WWII Germany, young Liesel finds solace by stealing books and sharing them with others. Under the stairs in her home, a Jewish refuge is being sheltered by her adoptive parents."

Divided We Fall
"...tells the true and bittersweet story of a Czechslovakian couple whose village has been taken over by Nazis during World War II. Josef (Boleslav Polívka) and Marie Cizek (Anna Šišková) lead a simple and restricted life in their small apartment while outside the turmoil of war and prejudice is a constant threat. When they decide to hide a young Jewish neighbor in their home (Csongor Kassai), the danger of their situation increases..."

The Diary of Anne Frank
"This real life diary of a young Jewish girl in Nazi-occupied Holland perfectly conveys the tension, claustrophobia, and intense hardships suffered by two fugitive families."

Europa Europa
"A's World War II splits Europe, sixteen-year-old German Jew Salomon (Marco Hofschneider) is separated from his family after fleeing with them to Poland, and finds himself reluctantly assuming various ideological identities in order to hide the deadly secret of his Jewishness. He is bounced from a Soviet orphanage, where he plays a dutiful Stalinist, to the Russian front, where he hides in plain sight as an interpreter for the German army, and back to his home country, where he takes on his most dangerous role: a member of the Hitler Youth.."

JoJo Rabbit
"A World War II satire following an awkward young German boy (Roman Griffin Davis) raised by a single mother (Scarlett Johansson), and whose only ally is his imaginary friend Hitler (Waititi). His naïve patriotism is tested when he meets a young girl (Thomasin McKenzie) who upends his world views, forcing him to face his biggest fears."

Schindler's List
"A portrait of Oskar Schindler, who saved more than 1000 Jews during the Holocaust."

Son of Saul
"October 1944, Auschwitz-Birkenau, Saul (Géza Röhrig) is a Hungarian member of the Sonderkommando, the group of Jewish prisoners forced to assist the Nazis. While working, Saul discovers the body of a boy he takes for his son. As the Sonderkommando plans a rebellion, Saul decides to carry out an impossible task: save the child's body, find a rabbi to recite the mourner's Kaddish and offer the boy a proper burial." 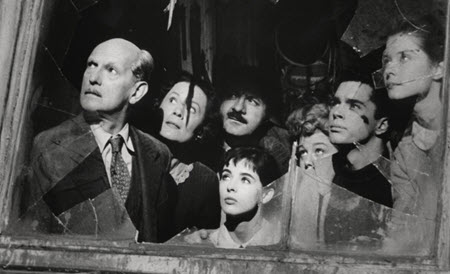 (The Diary of Anne Frank)