Being There
"A gardener is forced into the world when his employer dies in this satire of television and politics."

The Big Lebowski
"A slacker known to his friends as 'The Dude' gets mixed up in a convoluted kidnapping plot with an eccentric millionaire whose name he shares."

Birdman
"... is a black comedy that tells the story of an actor (Michael Keaton) — famous for portraying an iconic superhero — as he struggles to mount a Broadway play. In the days leading up to opening night, he battles his ego and attempts to recover his family, his career, and himself."

Bringing Up Baby
"David Huxley, an archaeologist, is waiting to get a bone he needs for his museum collection. Through a series of strange circumstances, he meets Susan Vance, and the duo have a series of misadventures which include a leopard called Baby."

Broadcast News
"Basket-case network news producer Jane Craig falls for news reporter Tom Grunnick, a pretty boy who represents the trend towards entertainment news she despises. Aaron Altman, a talented but plain correspondent, carries an unrequited torch for Jane. Sparks fly between the three as the network prepares for big changes, and both the news and Jane must decide between style and substance."

Dr. Strangelove Or: How I Learned to Stop Worrying and Love the Bomb
"A fanatical U.S. general launches a nuclear attack on Russia during the Cold War, but the President and his advisors are shocked to learn that the Russians have technology to destroy the world in the event of an attack on them."

The Grand Budapest Hotel
"...recounts the adventures of Gustave H, a legendary concierge at a famous European hotel between the wars, and Zero Moustafa, the lobby boy who becomes his most trusted friend. The story involves the theft and recovery of a priceless Renaissance painting and the battle for an enormous family fortune — all against the back-drop of a suddenly and dramatically changing Continent."

Mrs. Doubtfire
"When unemployed dad Robin Williams loses custody of his three children, he transforms himself into an elderly British nanny so he can spend more time with them. As 'Mrs. Doubtfire' Robin Williams becomes the perfect mate - until his ex-wife finds out."

Nothing Sacred
"In the first ever color screwball comedy, Hazel Flagg (Carole Lombard), certain she was dying from radium poisoning, is delighted to learn from her doctor that it was a false alarm. But when dapper and desperate New York City reporter Wally Cook (Fredric March) shows up looking for a story about a young girl braving terminal illness, Hazel decides to keep up the act..."

Pygmalion
"Cranky Professor Henry Higgins (Leslie Howard) takes a bet that he can turn Cockney guttersnipe Eliza Doolittle (Wendy Hiller) into a 'proper lady' in a mere six months in this delightful comedy of bad manners, based on the play by George Bernard Shaw."

The Seven Year Itch
"When a New York publisher's wife goes away for the long, hot summer, he finds himself succumbing to forbidden liquor and cigarettes and dreams of girls; especially the well-stacked blonde upstairs;who almost promises but never delivers."

Stage Door
"Terry Randall, rich society beauty, has decided to see if she can break into the Broadway theatre scene without her family connections. She goes to live in a theatrical boarding house and finds her life caught up with those of the other inmates and the ever-present disappointment that theatrical hopefuls must live with..."

To Be Or Not To Be
"As nervy as it is hilarious, this screwball masterpiece from Ernst Lubitsch stars Jack Benny and, in her final screen appearance, Carole Lombard as husband-and-wife thespians in Nazi-occupied Warsaw who become caught up in a dangerous spy plot."

Young Frankenstein
"Gene Wilder is the professor who creates a new zippernecked monster. Marty Feldman is his assistant; Cloria lady of the castle; and Madeline Kahn is Dr. Frankenstein's fiancee!" 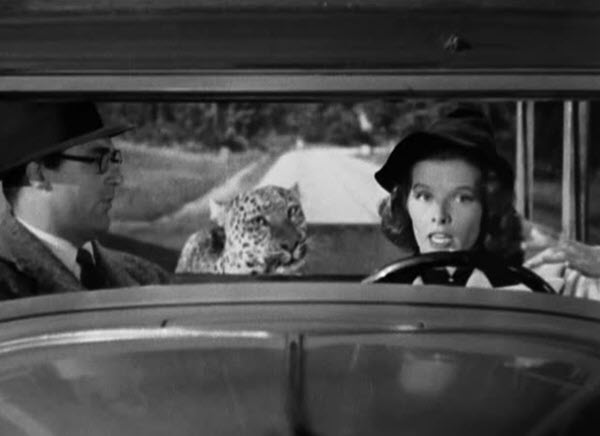 (Cary Grant, "Baby", and Katharine Hepburn in Bringing Up Baby)