Bohemian Rhapsody
"A chronicle of the years leading up to Queen's legendary appearance at the Live Aid (1985) concert in 1985."

Erin Brockovich
"A law-office worker investigates a utility company that has contaminated groundwater in a small California town. Based on a true story."

The Favourite
"...is a bawdy, acerbic tale of royal intrigue, passion, envy and betrayal in the court of Queen Anne in early 18th century England. At the center of the story is the Queen herself (Olivia Colman), whose relationship with her confidante, adviser and clandestine lover Sarah Churchill, Duchess of Marlborough (Rachel Weisz) is turned upside down by the arrival of the Duchess's younger cousin Abigail (Emma Stone). Soon the balance of power shifts between the women as they jockey for influence with the Queen and the court.

Frida
"Best Actress nominee Salma Hayek stars as Mexican surrealist Frida Kahlo in this biopic, which chronicles her turbulent marriage to Diego Rivera, her political activism and the severe pain she experienced following a bus accident."

Gandhi
"Recalling the life of Indian lawyer Mohandas K. Gandhi (1869-1948), who famously led nonviolent revolts against British rule and spoke out against the caste system. A Best Picture winner."

Good Night, and Good Luck
"A vivid chronicle of CBS newsman Edward R. Murrow's battle with Sen. Joseph McCarthy over his Communist witch-hunts in the 1950s."

A Hidden Life
"Based on real events, A Hidden Life is the story of an unsung hero, Bl. Franz Jägerstätter, who refused to fight for the Nazis in World War II. When the Austrian peasant farmer is faced with the threat of execution for treason, it is his unwavering faith and his love for his wife, Fani, and children that keeps his spirit alive."

Jackie
"...is a searing and intimate portrait of one of the most important and tragic moments in American history, seen through the eyes of the iconic First Lady, then Jacqueline Bouvier Kennedy (Natalie Portman). Jackie places us in her world during the days immediately following her husband's assassination. Known for her extraordinary dignity and poise, here we see a psychological portrait of the First Lady as she struggles to maintain her husband's legacy and the world of "Camelot" that they created and loved so well."

Young Mr. Lincoln
"Ten years in the life of Abraham Lincoln, before he became known to his nation and the world. He moves from a Kentucky cabin to Springfield, Illinois, to begin his law practice. He defends two men accused of murder in a political brawl, suffers the death of his girlfriend Ann, courts his future wife Mary Todd, and agrees to go into politics." 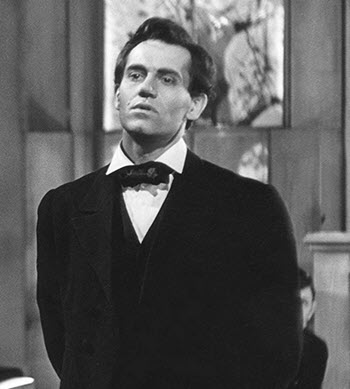