Angels in America Part I  - Millenium Approaches
"Part 1 – Chapter 1 - New York City, 1985. A gay couple's relationship is rocked by the revelation that one has AIDS; a young man named Joe Pitts is offered a job by conservative icon Roy Cohn--who also learns he has AIDS. Part 1 – Chapter 2 - Louis abandons a hospitalized Prior; Joe and Roy confide in each other over drinks. Later, Prior hears voices from his hospital bed while Louis solicits sex from strangers, and Joe makes a drunken confession to his mother. Part 1 – Chapter 3 - Prior returns home and is visited by a pair of spectral namesake ancestors who herald the arrival of the messenger; a tussle with Joe leaves Roy with the ghost of Ethel Rosenberg. Later, Joe and Louis hook up in Central Park while Prior meets the angelic messenger."

Angels in America Part II - Perestroika
"Part 2 – Chapter 4 - While Joe is being seduced by Louis, Prior is being aroused by the baffled Angel. Meanwhile, Roy's health worsens; Harper's hallucination is interrupted by reality; Prior tells Belize about his divine mission; and Hannah tries to help Harper. Part 2 – Chapter 5 - Louis arranges a meeting with Prior; Joe visits Roy in the hospital and gets an unwelcome father's blessing; Prior drags Belize to the courthouse for a surprise meeting with the clerk and later strikes up a friendship with Hannah. High on morphine, Roy paints a different picture of heaven. Part 2 – Chapter 6 - A fight with Joe leaves Louis badly scarred; Roy plays a final practical joke on Ethel; Prior wrestles the Angel and then addresses a review board in Heaven; Harper heads out West; Prior, outliving his diagnosis, pays a visit to his favorite angel and vows to keep living--free of secrets."

Fight Club
"In this adaptation of Chuck Palahniuk's 1998 novel, Brad Pitt stars as Tyler Durden, a sociopath filled with anarchic rage, who organizes an underground organization of 'fight clubs'..."

Great Gatsby (2013)
"Aspiring writer Nick befriends an aloof millionaire who throws elaborate parties in the hope of rekindling his romance with Nick's unhappily married cousin Daisy, whose husband is a philandering aristocrat."

The Grapes of Wrath
"In this enduring classic, a family of sharecroppers travels westward, driven from their Oklahoma farm by drought, failed crops, and mechanization. But the golden dream of California also fails them..."

The Ice Storm
"...unfolds over a Thanksgiving weekend in New Canaan, CT, in 1973. The Hoods, an upper-class family, are experiencing the sexual revolution of the 60s which has finally come to suburbia..."

Jane Eyre
"Jane comes to Thornfield Hall as a governess to the young ward of Edward Rochester. Denied love all her life, Jane can't help but be attracted to the intelligent, vibrant, energetic Mr. Rochester, a man twice her age... ...."

A Passage to India
"David Lean's adaptation of E.M. Forster's 1924 novel of culture clash during British colonial rule follows a headstrong British woman traveling with her future mother-in-law through India."

The Prime of Miss Jean Brodie
"Maggie Smith won an Oscar as the flamboyant, eccentric, and devoted Scottish teacher who believes that all girls who leave her classes are the 'creme de la creme', in this humorous and touching story."

To Kill A Mockingbird
"A widowed, morally upright lawyer defends a black man accused of raping a white woman in 1930's Alabama. Meanwhile, his two young children become involved in a mystery involving the town pariah."

A Tree Grows in Brooklyn
"In Brooklyn circa 1900, the Nolans manage to enjoy life on pennies despite great poverty and Papa's alcoholism. We come to know these people well through big and little troubles: Aunt Sissy's scandalous succession of "husbands"; the removal of the one tree visible from their tenement; and young Francie's desire to transfer to a better school...if irresponsible Papa can get his act together." 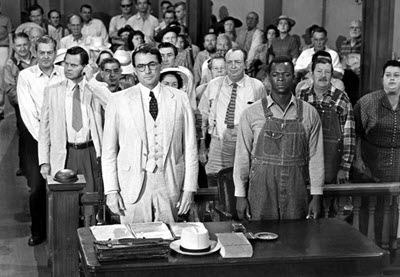 (To Kill a Mockingbird)